As I write this, I keep looking at my fingernails. They are stained an interesting shade of indigo—I look a bit like I’ve lost circulation in my extremities. I spent this morning having coffee with the wonderful Kathy from The Craftivist, and she took a photo of my hands for the shop’s Instagram account. 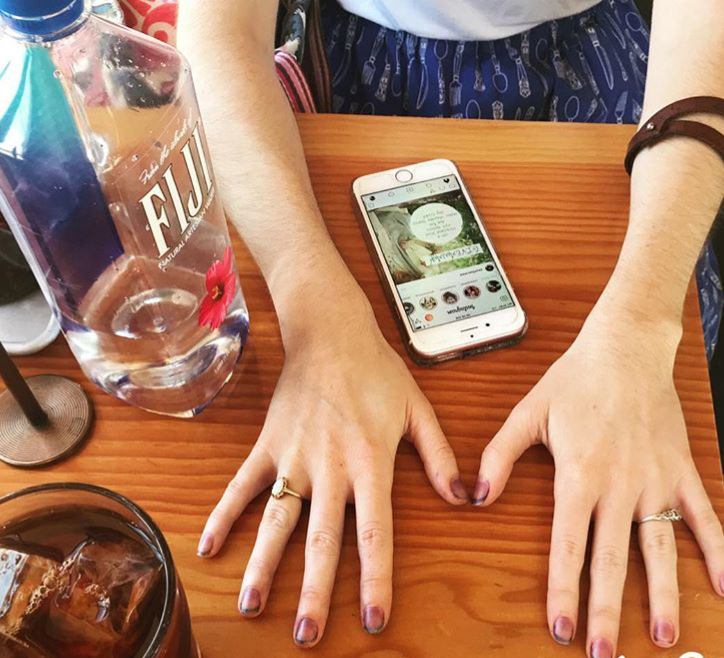 Rainbow gangrene is an occupational hazard, especially if one is a yarn dyer who thinks that gloves get in the way of The Process. I don’t want anything standing between me and the yarn, apparently, so I stick my fingers in dyepots, slosh liquid dye all over myself, speckle my hands with neon pops. A good shower or two is enough to get the dye off my hands, but since these dyes are formulated for protein fibers, my nails stay stained.

I wear this visible reminder of what I do with me for quite a while, and it’s like a badge of honor. After years of doing work where I had no clue if I was making a difference or, you know, actually doing anything, it is magical to find that at the end of the day, I have something to show for my hours of labor. I have a sore back and shoulders, and also five tubs of hand-dyed yarn, hanging out in their bubble bath. And there is this deep sense of satisfaction knowing that I Made The Things, that what with my own two hands and my color-obsessed brain, I took plain white yarn and made it into something else that will be made into something else. This is alchemy­. This is magic.

And I am deeply, stupidly grateful for my hands. I rub lotion into them (see also: averse to wearing gloves). I’m terrified of something happening to them. I worry about falls and broken fingers and arthritis because y’all—if I couldn’t knit, I think I’d have to be on a Xanax IV drip.

In my previous life, the best parts of my job were the ones when I got to work with my hands: breaking bread and raising a chalice, holding my hands up in a now-archaic position of prayer and saying ancient words I did not make up, scooping up and pouring water from the baptismal fount over babies’ heads, squeezing the hands of patients in the hospital who just needed to know that someone was there with them in the middle of pain and illness.

I’m from a long line of engineers, the daughter and granddaughter of people who made and unmade things, of people who took things apart and put them back together again, made them better, faster, stronger, or just different. My father’s workshops (plural) are a jumble of woodworking tools and scraps, HAM Radio detritus, the inner workings of computers (some dating back to the 1970s), welding materials. He is a fixer, a reinventer, a man who says, “Oh, yeah, we can do that” and then does.

I’m grateful for his example—for the way in which he modeled the inherent value in making things. He was a white-collar worker, but his joy was always in making actual things work. (This is the man who built a 30 foot-high radio antenna in the yard so he can bounce radio signals off the moon, because, and I quote, “I could.”)

I think in a lot of ways, late-stage capitalism has alienated us from the work of our hands. Someone else does the things for us—someone else grows and picks our food, makes our clothes, builds our furniture. This is the most efficient way to do things, at least from a profit standpoint, but it means that we forget what goes into these things—what it’s like to dig a potato out of the soil or pick strawberries, or how much work goes into sewing a hemline, or what goes into making sure a table will actually stand upright (I know shit about making furniture).

But those of us who make things: be it dinner, or a sweater, or a piece of jewelry, or a dress, or a radio antenna that bounces signals off the moon—we know. And we also know the deep satisfaction of eating or wearing something we have made. There is nothing like it. My handknit socks make me feel like Cinderella because APPARENLTY I HAVE BEEN WEARING THE WRONG SIZE SOCKS FOR THE PAST THIRTY-FOUR YEARS.

And there’s more to all of this than the satisfaction of a job well done. I think we makers are engaging in the process of making ourselves whole.

We are putting ourselves back together again: one side dish, one stitch, one seam, one skein of yarn at a time. We are rewiring ourselves, changing the ways in which we have become disconnected, not only from one another, but from ourselves. We forget that we are whole, embodied human beings, with the creative capacity to feed and clothe ourselves, to make something out of the almost-nothing of sticks and strings and dirt and wires.

As someone who spends an inordinate amount of time and money making somethings out of almost-nothings, I have found healing and wholeness and a real conviction of my own badassery.

I hope the same for you—that through whatever you make, you find yourself whole.

And take good care of your hands.